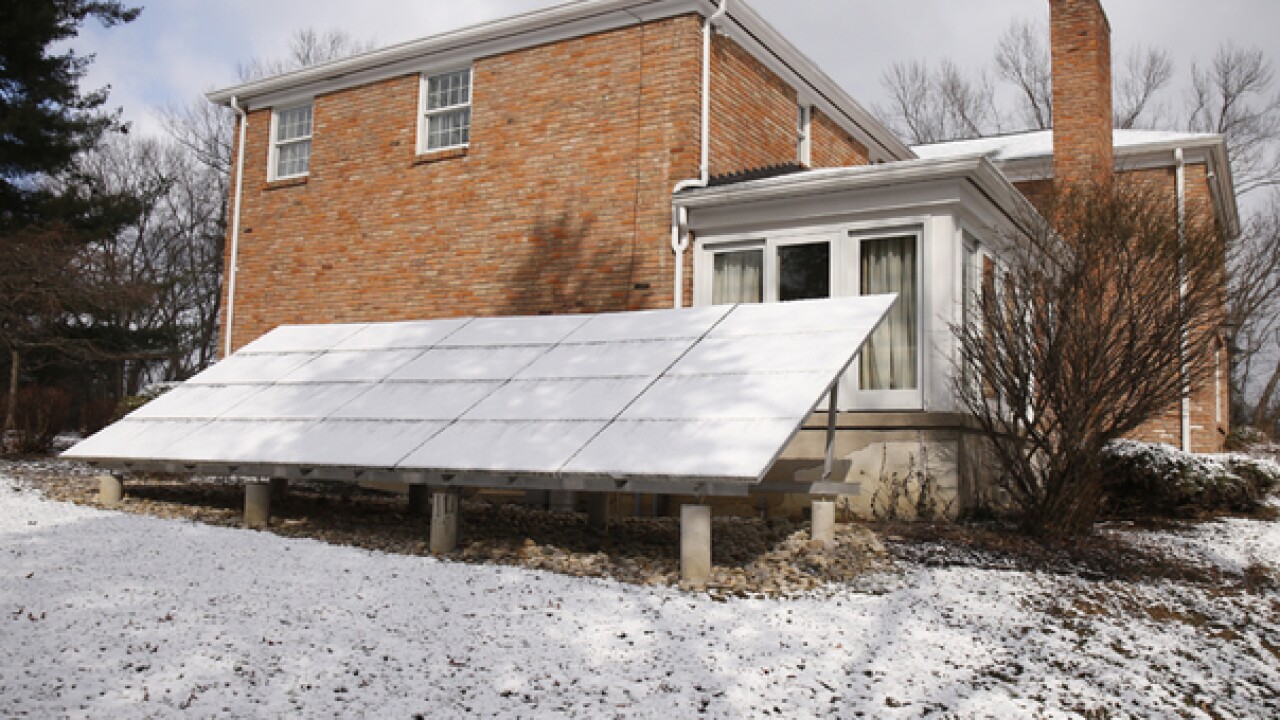 Copyright 2017 Scripps Media, Inc. All rights reserved. This material may not be published, broadcast, rewritten, or redistributed.
Gary Landers
A solar panel, photographed at the Indian Hill home of Steve and Mary Frances Melink, Thursday, Feb. 9, 2017. (Photo by Gary Landers/WCPO)

FRANKFORT, Ky. (AP) — Homeowners who install solar panels will likely get less credit for the power they generate after Kentucky lawmakers OK'd new rules for the fledgling industry in one of the country's top coal-producing states.

The legislation was one of 119 bills Kentucky lawmakers finished on Thursday, an explosion of activity as the Republican-dominated legislature rushed to meet a deadline to preserve its right to override any potential vetoes from the state's conservative but unpredictable governor.

Bills that made the cut include a proposal to let more low-level felons erase their criminal records and increase the use of ignition interlock devices for drunken driving cases.

But lawmakers did not pass bills that would have weakened the state's open records law, given relief to some agencies struggling to make retirement contributions for their employees and reversed a six-figure pay raise for the state's chief technology officer, who's a friend of Gov. Matt Bevin.

The solar bill, Senate Bill 100, was among the most fiercely debated proposals of the session. People with solar panels on their homes generate their own power. When they don't generate enough, they buy it from the utility company like everyone else. When they generate too much, they sell the power to the utility company. Customers don't get cash, but a credit toward their power bill.

Utility companies currently have to buy that power at the same rate they sold it. But Senate Bill 100 would let state energy regulators set the price. It would likely be lower, because regulators would consider how much it cost the utility companies to maintain the equipment that supplies power to the homes.

"Monopolies won today," said Matt Partymiller, president of the Kentucky Solar Industries Association. "It is a blow to every Kentuckian who wants to choose solar as his or her energy provider."

Republican Rep. Jim Gooch dismissed that criticism. He said it's not fair for utility companies to be forced to buy power from residential solar companies in the afternoon only to sell it back to them at the same price in the evening when it's dark.

"You are forcing the grid or the utility to be your storage for no cost at all. That's not fair either," Gooch said.

Gov. Matt Bevin has 10 days, excluding Sundays, to review the bills passed this week. He can sign them into law, veto them or let them become law without his signature. Lawmakers will return to Frankfort on March 28 to consider his vetoes before adjourning for the year. They could also pass other bills. But if Bevin vetoes those bills, lawmakers could not override him.

Bevin will also consider signing a bill that makes it easier for some people convicted of nonviolent felonies to erase their records. The bill would lower a required fee to $250 from $500 and expand the number of felonies eligible for expungement.

Lawmakers also passed Senate Bill 85, which would let first-time DUI offenders choose to have an ignition interlock device installed on their car for four months. The device does not let the car start unless the driver is sober. People who refuse to install the device would face a six-month suspension of their driver's licenses.

"We hope and expect to see the utilization climb dramatically from the 4 percent we see in the state today to something substantially higher than that, and it will save lives," said Republican Sen. Whitney Westerfield, the bill's lead sponsor.

Republican Rep. Jeff Hoover, a defense attorney, did not vote for the bill. He noted offenders have to pay for the devices to be installed on their cars, making it more likely for poor people to have their licenses suspended.