Xavier's Sumner opens up about decision to go pro 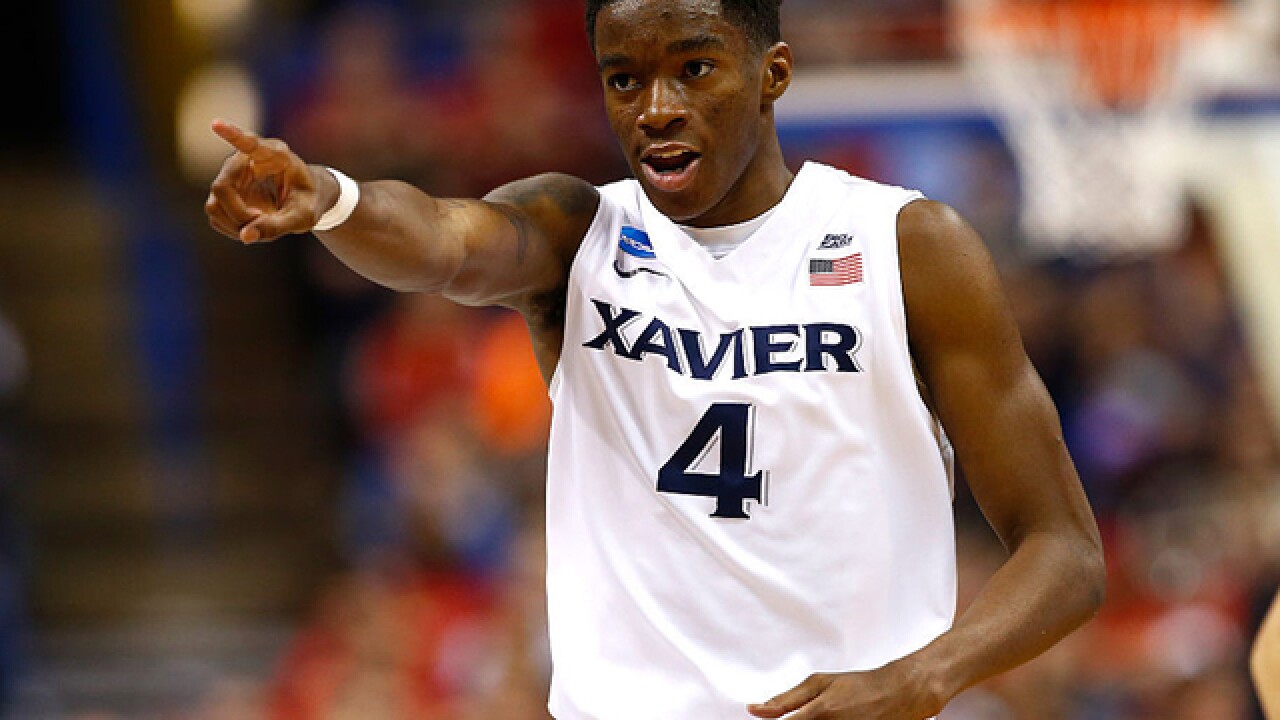 Image copyright 2017 Getty Images. All rights reserved. This material may not be published, broadcast, rewritten, or redistributed.
Jamie Squire
<p>ST LOUIS, MO - MARCH 20: Edmond Sumner #4 of the Xavier Musketeers reacts after a play in the first half against the Wisconsin Badgers during the second round of the 2016 NCAA Men's Basketball Tournament at Scottrade Center on March 20, 2016 in St Louis, Missouri. (Photo by Jamie Squire/Getty Images)</p>

Edmond Sumner was so enamored with Xavier University and its basketball program that he verbally committed in May 2013, several months before any other member of his class pulled the trigger.

His relationship with Chris Mack was a huge factor in his decision, which made Tuesday's meeting with the Musketeers' coach so difficult. Sumner told Mack he was leaving to pursue his NBA aspirations.

"This is one of the few men who actually wanted to take a chance on me and that actually believed in my abilities, so it was kind of hard to say that I wasn't going to be returning to play for him," Sumner said late Tuesday. "I'm just grateful that he was even willing to take a chance."

Sumner announced on Twitter earlier in the day that he was entering the NBA draft. He confirmed later that he will hire an agent. Sumner, a junior academically and a sophomore athletically, will not return to Xavier to use his remaining eligibility.

Sumner also clarified his reasons for leaving now. The 6-foot-6 point guard tore the ACL in his left knee Jan. 29, underwent surgery March 1 and was shelved for the season.

The typical recovery period for an ACL tear is nine to 12 months.

"The biggest thing was really my time I could return to play," Sumner said. "If the doctors had said, ‘You can be back by November or December,' I would have 120 percent returned to Xavier. But that's a big ‘if.' I could be back by December, or I could be back by March. I just felt it wasn't going to put me in the greatest circumstances for my goals so I thought it would be best to enter (the draft) now."

Sumner is finishing online courses and will spend the foreseeable future in New York, rehabbing at the Hospital for Special Surgery (HSS). The outpatient facility is ranked No. 1 nationally in orthopedics by U.S. News & World Report.

While other college players aspiring to be drafted will work out for teams through May 24, the deadline to withdraw one's name to return to college, Sumner obviously will be unable to showcase his physical skills. His "workouts" will consist mainly of interviews. Teams also will check his medical records to see how his knee is progressing.

Sumner also will have surgery on his labrum "in the near future" but said the timeline for his knee is longer. NBA facilities are equipped with state-of-the art medical services that would best poise him for a return to basketball.

Asked if he had a feel for where he might be drafted, since most mock boards have pushed him back to the 2018 draft, Sumner said he had some knowledge of where he might fall but did not elaborate.

Could he still be a first-round pick on June 23?

"Anything could happen," Sumner said.

Sumner told his teammates about his decision well before making it public and received great support from them. He said he has felt a groundswell of support from fans, too, especially since his knee injury.

"The couple past months I've just seen fans -- not just students but fans as a whole. Like when I was in New York (for the Big East Tournament), I wasn't with the team, so I would be walking by myself. They would just come up to me and show me a lot of love. A lot of people still are showing me a lot of love," Sumner said.

He welcomed that in the dark days after his injury. Less than 24 hours after he hurt his knee in New York, he briefly watched Xavier's practice from a wheelchair on a corner of Cintas Center's court. He has graduated to crutches since then.

"It's been very tough, I would say, just having to watch the guys go out there and play, knowing my year is done. It was very hard to watch and cope with," Sumner said. "The first week was probably the hardest, just dealing with the injury and stuff. But as time went on, and the guys picked it up, it got better. My spirits got better. Everything just started getting better as a whole."

Sumner, who emphasized that he cherished his three years at the school and with the program, was a key cog in the Musketeers' record-setting season in 2015-16. Some of his favorite memories as a Musketeer were in that campaign.

"Just the type of year we had last year and just being a part of that team was special. It was probably one of my best overall experiences in basketball as whole with my teammates. Not just me and my accolades but as a whole. That was just a great year for me," Sumner said.

Although Sumner is leaving Xavier now, he said will always be an important place to him -- filled with important people.

"I just love Xavier as a whole," Sumner said. "It definitely was a hard decision."