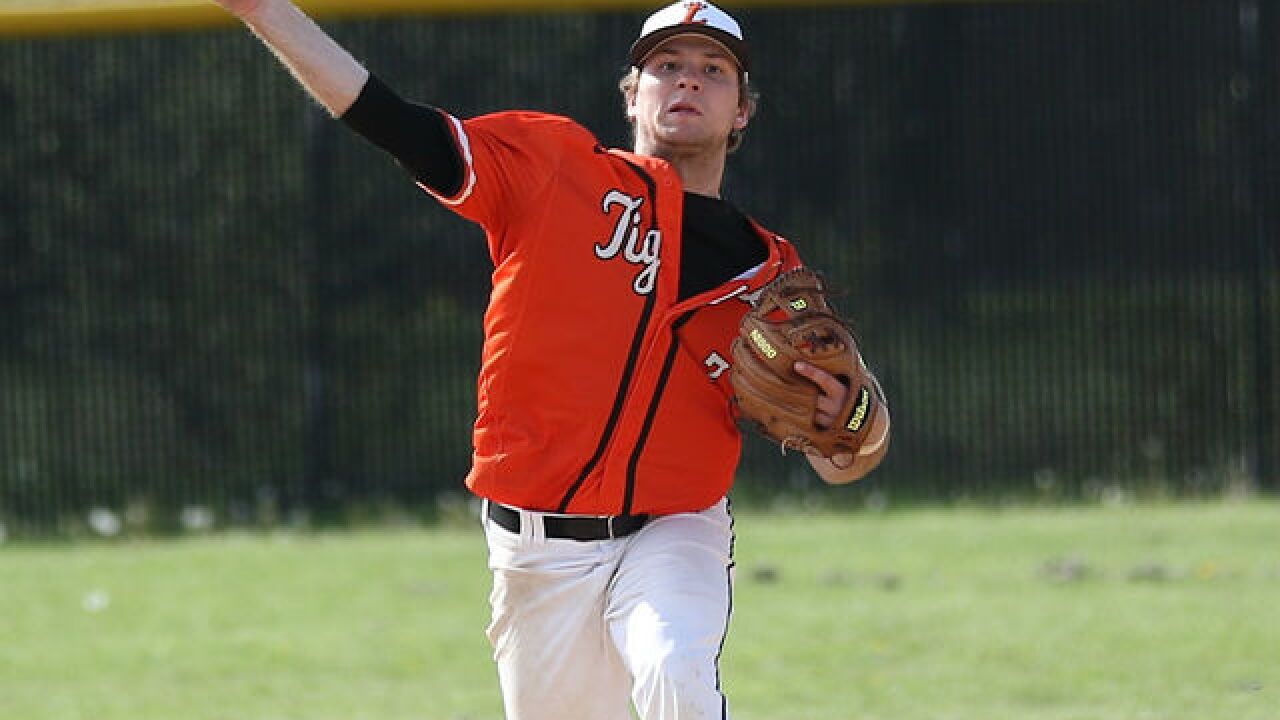 LOVELAND, Ohio -- If it seems like Loveland's Luke Waddell has been playing high school sports for quite a long time, it's because he has. Waddell, 18, is one of the most decorated student-athletes in Greater Cincinnati since 2013. The multi-sport star's time with the Tigers is winding down and his teammates and coaches will miss him -- on and off the field.

“What he’s done and has accomplished in four years is astonishing,” Loveland football coach Fred Cranford said. “It’s an absolute honor to be a part of his four years because of the type of kid he was.”

Waddell embodies leadership and commitment to his peers and coaches.

“He really wanted to be a Loveland Tiger. He wanted to represent Loveland High School and the Loveland community the best that he always could when he went out on the field and on the court,” Loveland Athletic Director Julie Renner said.

A title to remember

Last weekend's NFL Draft, of all things, rekindled one of the biggest highlights of Waddell's Loveland career.

When Ohio State cornerback Marshon Lattimore, a former Cleveland Glenville standout, was selected No. 11 by the New Orleans Saints last week, Waddell and his friends had fun messaging each other about the time they played Lattimore’s high school team.

Loveland defeated Cleveland Glenville 41-23 in the Division II state final on a very snowy Friday night at Canton’s Fawcett Stadium in December 2013. Waddell was the only Loveland freshman varsity player at the time.

Waddell remembers his gloves getting soaked on the second play of the game and he soon discarded them. He rushed 20 times for 183 yards and a touchdown.

Waddell’s teammates tried to stay calm in the locker room with a 34-0 halftime lead. Glenville was the favorite on paper and had numerous top recruits but committed seven turnovers in the snowstorm. The Tigers won the school’s first state football title in convincing fashion.

“It was just a fun game to look back on,” Waddell said.

Waddell continued to excel in football the next three years. He rushed for 5,600 career yards and 59 touchdowns. He had 7,334 all-purpose yards and 76 total touchdowns.

“He’s hard to talk about,” Cranford said with emotion in his voice. “He’s hard to describe. How he handles himself as a young man -- he wasn’t a first-round draft pick. There is no question which kid I want to coach again and again.”

Future is on the diamond

Football is Waddell’s favorite sport, but he knew baseball was best opportunity in college.

“I talked to a lot of football coaches,” Waddell said. “I think that freshman year I kind of realized that I am not that big. I think baseball was a better path for me.”

As the 5-foot-8, 180-pound Waddell completes the final few games of the baseball regular season with the Tigers this week, he is reflective of all the opportunities he’s had in football, baseball and the two years of high school basketball.

“The older I’ve gotten and the more people I’ve met the more you realize these high school guys are what you are going to look back at,” Waddell said. “It’s meant the world to me.”

“He’s a phenomenal athlete and an even better kid,” says JD Heilmann, a scouting supervisor for Prep Baseball Report who also coached in the Midland organization. “How many kids can start as a freshman in both football and baseball?”

“Luke is having one of the most compete seasons of any player in Loveland High School history,” Loveland baseball coach Ken Reed said. “His statistics may not jump off the page but he is excelling at every facet of the game.”

Waddell is also another coach on the field so to speak. He’s played his entire high school career at shortstop while he also played second base with the Midland organization.

“One of the best attributes Luke brings to the field is an even keel mentality,” Reed said. “I have never worried about how handles the mental side of the game.”

Leader on field and in classroom

“No. 1 he’s a really good hitter and he can hit the ball to all fields,” Hall said. “He’s a great runner. “He’s an extremely competitive kid.”

That competitiveness lends itself to academics, too. Waddell scored a 30 on his ACT and has over a 4.0 grade-point average. He plans to study business administration with a minor in business engineering.

“He’s a natural-born competitor,” Cranford said. “That’s a character trait that’s hard to instill. He’s just respected. All of his peers really value the kind of kid he is and he’s leadership.”

Waddell understood the spotlight he was under since his freshman season. He embraced the Loveland fans and community. He signed autographs for youngsters as a sophomore. He made it a point to be respectful to everyone.

“If I had to define Luke in one word I’d say he’s all about team and winning,” says his father, Eric Waddell. “He has always been on an even keel.”

That mentality went a long way with the high school coaches, administration and teammates at Loveland.

“I'm grateful that I have had a front-row seat for Luke's career on both the football and baseball field,” Reed said. “He is a rare talent that has been a joy to coach.”