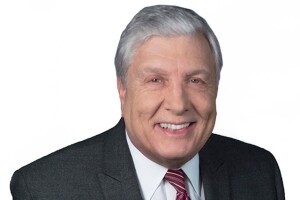 When did you start working here? Soon after the dinosaurs left this year. It was July of 1979.

Where else have you worked? My start in broadcast was at WKTL radio in Struthers, Ohio, the first student operated station in the state. That was 1965. Later WOUB at Ohio University. Professionally at WDBQ Radio in Dubuque, Iowa and WOC Radio and Television in Davenport, Iowa.

Where did you go to college? Ohio University

What are you most proud of when it comes to your work? I've been able to change with the times. The business looks a lot different than when I first started, so there had to be adjustments along the way in order to stay relevant. I've tried to maintain excellence even as staffs were cut, duties were increased and standards were lowered.

What are you most proud of in your own life? My immediate family, my son Matthew and my wife Kathie. We'll be married 40 years this November. Not easy in this business. Also the family I grew up with - six kids in a three bedroom house. All of us have college degrees, and some have masters and doctorates. Not me. I was the least talented of six kids.

What do you love about living in the Tri-State? I like watching Cincinnatians drive in the snow and rain. Drive like hell then slam on the breaks. I'm amused by this.