Home Tour: College Hill estate is a showplace of history 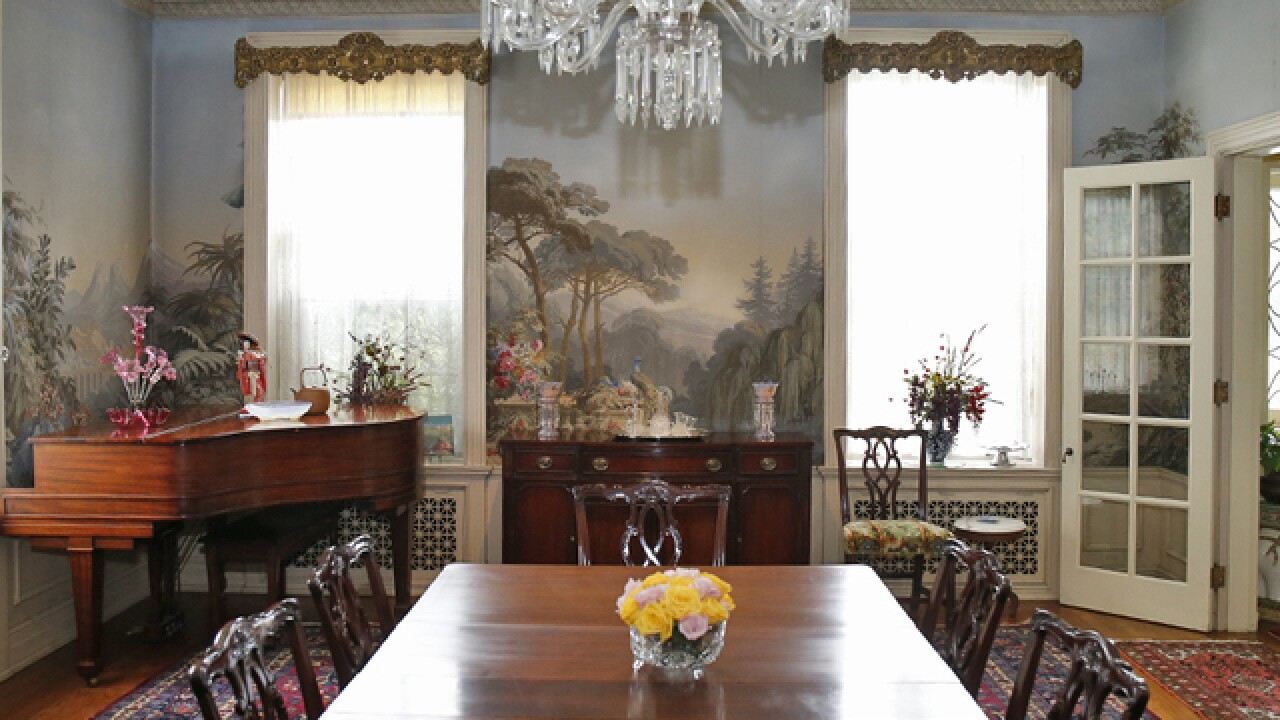 Copyright 2018 Scripps Media, Inc. All rights reserved. This material may not be published, broadcast, rewritten, or redistributed.
Gary Landers
The dining room, photographed in the College Hill home of Ed and Melissa Loyd Friday, June 1, 2018. (Photo by Gary Landers/WCPO)

CINCINNATI -- When Ed Loyd was 7 or 8 years old, his parents considered selling the grand College Hill home he had lived in since he was 3.

His mother, Gloria Blanco Loyd, still remembers what he had to say about that.

Decades later, Ed Loyd did buy his childhood home. This time, he was encouraging his parents to sell and downsize from the 6,800-square-foot estate they had purchased in 1977.

When he found a shard of china while working in the garden, he realized he'd also found the right buyer. He'd found similar pieces in the dirt before, but this one got him thinking about all of the history that the home had seen, and how many interesting stories it must have to uncover.

He decided to be the one to uncover them.

Loyd had lived in Columbus, where he worked in state government, and in Washington, D.C., where he served as press secretary for the U.S. Department of Agriculture under George W. Bush. When he moved back to Cincinnati to work for Chiquita in 2007, he thought he'd buy a home in Hyde Park or Mount Lookout, where many of his friends lived.

"I realized I could never buy a place like this, but I could fix it up," he said of his parents' home.

So he started restoring the house and in 2010 bought it from his parents. Keeping the home's historic details intact has always been his focus.

"Homes like this, you become the steward," said Loyd, who is now vice president of marketing and communications at REDI Cincinnati.

"When I started dating my wife, I told her I had a mistress," he joked. "That was my cheeky way of saying there are things we want to do, and things the house tells us to do."

While exploring the home's history, he also learned his community's history -- so much so that he became president of the College Hill Historical Society, a position he still holds, in 2009.

From his research, he learned that the history of the home itself began in 1867 when Daniel B. Pierson, a lumber merchant who also taught agriculture at Farmers' College in College Hill, built a Samuel Hannaford design. (An Italianette house that had previously stood on the site had burned down. Loyd displays a framed lithograph showing what it once looked like.)

The Hannaford home's bones are still there today, but the house underwent dramatic changes in the ensuing decades. Another early owner, Cincinnati Municipal Lunken Airport namesake Edmund H. Lunken, changed the home's orientation and added a columned Tuscan porch, a new back entrance, portico and garage.

Bigger changes came courtesy of Orville and Cora Allen Simpson, who owned what is now Rotex Inc. They bought the home in 1924 and hired architect John Scudder Adkins for a renovation that, as Loyd puts it, "completely de-Victorianalized it" and transformed it into a colonial revival style. (Some blueprints from that renovation now hang in the stairwell.)

According to Loyd's research, renovations included demolishing a servant's wing, changing window placements, removing chimneys and fireplaces, adding an elevator, and recessing the third floor into a new roof line. In fact, only two of the 16 rooms kept the same floor plan, his research shows.

Visitors today might not notice those changes. But they undoubtedly will notice another addition from that remodel: Zuber's "Eldorado French scenic landscape wallpaper in the dining room. Printed using 1,554 carved woodblocks and 210 colors, its scenery represents gardens from Africa, America, Asia and Europe. It's like something from a museum -- in fact, the Cooper Hewitt, Smithsonian Design Museum in New York has a collection of the panels.

Then again, many aspects of the home that Loyd now shares with his wife, Melissa, and his mother give it a museum feel. In researching the house, Loyd tracked down descendants of all former owners. They rewarded his efforts with gifts ranging from photographs and letters to silver that belonged to the Piersons to portraits, candelabras, chairs and drawings from the Simpsons' time there.

Cincinnati history is represented in artwork Loyd has added: Pieces by local artists John Wareham, Effie Trader (who was his grandfather's cousin) and Caroline Williams. The latter's self-portrait hangs where it can look toward Larch, where she grew up, Loyd said.

That's just part of the College Hill history that is everywhere in the home. Many furnishings that aren't family pieces belonged to neighborhood families, including the dining room table that has graced College Hill homes since the 1830s. There are portraits of William and Rebecca Cary, the founders of College Hill, in the entry. On the third floor are files upon files of community history.

Even the two-and-a-quarter-acre grounds and gardens, where Loyd has worked diligently clearing overgrowth while adding sculptures and stones, have history. He flashed back to his own history when he finished a garden walkway he started as a child.

A French magnolia dates to the 1860s, when the Piersons owned the home, while a working sprinkler system is from the 1920s, when the Simpsons owned the property. The gazebo is gone, but Loyd plans to rebuild it. For now, he has a painting showing it amid the magnolia blooms inside the home.

Loyd has put in a lot of effort to tracing all this history, but he finds it worthwhile -- even fun.