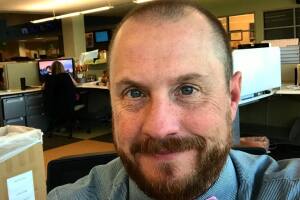 When did you start working here? December 2012

Where did you go to college? Western Kentucky University, BA in Journalism (1999); Oklahoma State University, MA in Literature and Film Studies (N/A).

What are you most proud of when it comes to your work? I am most proud of the daily work that allows me to inform, entertain, and every once in a while, affect positive change in the lives of others.

What are you most proud of in your own life? I am most proud of my family, having finished a few marathons, and getting to see the excellent work my colleagues produce at WCPO.

What do you love about living in the Tri-State? I love the region's growing food, movie and entertainment scenes, along with all of its runner-friendly neighborhoods.

Books: To Kill a Mocking Bird, Life of Pi, The Amazing Adventures of Kavelier and Clay, One Flew Over the Cuckoo's Nest, The Given Day, The Dog of the South, The Book Thief and The Big Sleep.